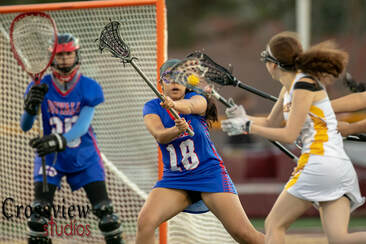 Girls lacrosse is a unique sport with some unique rules. It is quite different than boys lacrosse and is more different than are baseball and softball. Someone who hasn't played girls lacrosse but wants to understand it will benefit from this guide. A high school game video is included below. Safety first! Many rules are designed for safety of the players. The major fouls are primarily safety rules and the minor fouls are technical rules. After reading through them you will spot them on the video!

Key Major Fouls
Key Minor Fouls
Safety & Equipment
Once someone has an understanding of these major and minor fouls it is easy to see how girls lacrosse has a much higher safety rate than other sports, including girls basketball and girls soccer. Field players wear eye protection goggles, use a mouth guard and may wear optional soft head gear. Goalies wear a full hard shell helmet with a throat protector, use a mouth guard, wear a chest protector similar to a softball catcher, padded gloves, upper leg pads and shin guards.

Game Overview & Positions
Girls lacrosse is a minimal contact game played by 12 players. There are four attackers, three midfielders, four defenders and a goal keeper. The team scoring the most goals wins. Each team must keep at least five players, including the goalie, in its defensive half of the field and four in its offensive half.  The result is 7 v 7 play at each end for field players with the goalie the 8th defender, most often in her crease. This set number of offensive and defensive players resembles basketball at each end with picks and plays on offense countered by collapsing to help on the ball and double teams. During transition through the midfield astute soccer fans will notice the resemblance to that sport with redirects, switch of fields and cutting to the ball to help it get up the field.

Start Of The Game
Girls lacrosse begins with a Draw. The ball is placed between the sticks of two players at the center of the field and they are called the Centers for this purpose. The official blows the whistle to begin play. Each center tries to control the ball. The other 2 players on the draw circle can also run after the ball when the whistle sounds. All the other players must wait until one player has gained possession of the ball, or the ball has crossed into the offensive zone, before they can release and join the play. Draws take place at the start of each half and after a goal is scored.

Basic Skills
Field players use their lacrosse sticks to scoop, pass, catch and run with the ball (usually in the act of cradling) with either hand at the top half of the stick. If a defender plays a girl on her right side then the offensive player typically switches to her left hand to protect the stick, keep it away from the defender stick checks and then execute her skill.  Only the goalkeeper may touch the ball with her hands and only while inside the crease. Additional skills with most of the same motion as the basic skills include dodging, shooting and stick faking, with a change of levels and release points crucial for good shooters. Dodging requires combining stick movement with footwork, change of speed and deception by the offensive player. Cutting to get open requires most of the same and the ability to catch the ball in traffic.